Welcome to My Blog! Feel free to browse the categories and read up on what is of interest to you. If you need any further information or there is an issue that concerns you Contact Me. Have a great day...

In the Safer Residential Areas community consultation (2018) 77 per cent of all respondents felt vehicles travelled too fast through Dromana’s residential streets and around the town.

Very pleased to announce the opening of the new netballs courts at Marna Reserve, home of the Dromana Netball Club and Dromana Football & Netball Club.

Mornington Peninsula Shire funded the $530,000 for the new netball courts in Council’s 2020–21 Budget as part of the Sports Capacity Plan.

June 2021 - News from Your Shire Edition Out Now

June 2021 - News from Your Shire Edition Out Now

Read the latest issue and previous issues at this link: 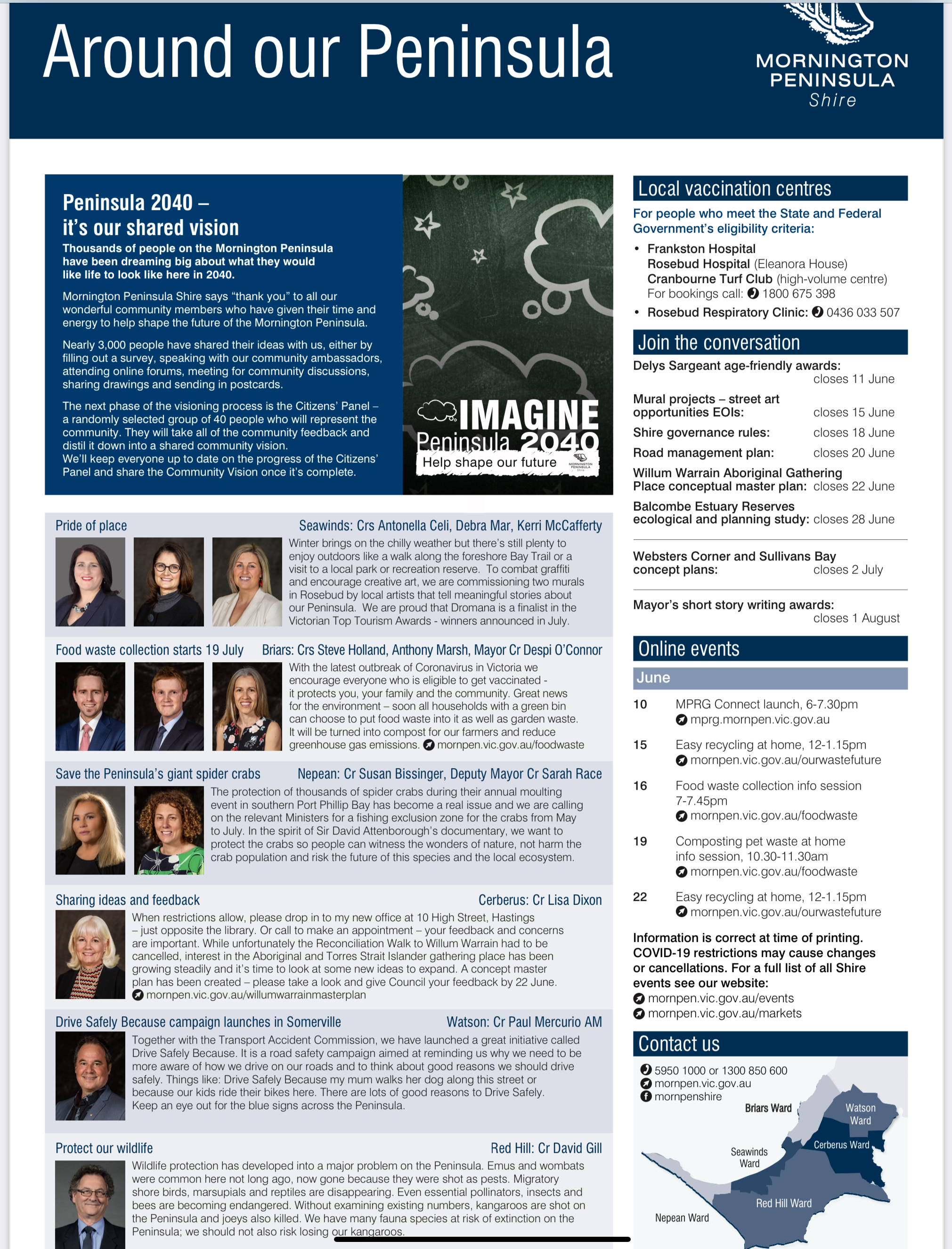 In response to Cr Steve Holland - Mornington Peninsula Shire “Natural Gas Ban” post - a simple context and perspective needs to be given https/www.facebook.com/CrSteveHolland

�Does Local Government have the legislative powers to ban private use of gas or gas appliances outright ? ❌NO

A planning application has been received by the Shire for 37 McCombe Street, Rosebud -  Rosebud Plaza site. for:

What is it all about?

Rosebud Plaza Management has made an application to demolish the building where Woolworths currentl...

On Saturday,  17th April Cr Debra Mar and I were invited to attend a special ceremony at Rosebud Girl Guides where Liesel Male – an inspiring local young woman achieved and was awarded her Queen’s Girl Gu...

Thank you to Sikh Volunteers Australia

Thank you to Sikh Volunteers Australia

On the 10th April I had the pleasure to attend the Sikh Volunteers Australia (SVA) thanksgiving function and receive a Gratitude Award on behalf of the Mornington Peninsula Shire.

The event was a welcoming multicultura...

The report came to a Council Meeting on 23rd March, ,2021 as a confidential item so therefore I am not permitted to disclose any details of the report.

But what I will say is that I did not vote to support this decision because I believed;

Foreshore camping on the Mornington Peninsula and in particular in Rosebud and McCrae, is an iconic destination for campers every Summer to enjoy our beautiful coastline and seaside holidays.

For many years the Shire has enjoyed a good relationship with campers who have provided invaluable feedback on how we need to improve the foreshore camping experience and contributed to the advocacy for much needed capital work improvements across the sites.

The table below highl...

A very welcome Growing Suburbs funding announcement of $4.3M for the integrated Youth Hub in Rosebud

When people and organisations come together for a common vision and keep at it over the many years, great projects are realised for our community.

“This integrated youth hub sets a precedent for the delivery of mental health & wellbeing services, programs and activities to our l...